Angel - What Can We Believe In

Dutch - It Breaks Your Heart

Lilly - Never In My Life

Marvin - The Give And Take

Photos of the Cooperstown Sessions

Photos of the Cooperstown Live Performance

A JAZZ OPERA ABOUT BASEBALL BY SASHA MATSON—

ENHANCED BY THE SUPERB QUALITY OF THE RECORDING

The word opera conjures up images of large casts, a huge orchestra and chorus and massive logistical issues. Not Cooperstown! A jazz opera in nine innings, Cooperstown utilizes five solo singers and a 1950s modern jazz quintet. Based on A. Bartlett Giamatti’s essay, “The Green Fields of the Mind,” composer Sasha Matson has, with librettist Mark Miller, used baseball as an art form, with the capacity to express the deepest emotional truths about individuals and society. Matson reflects baseball’s own specific historical musical attributes in his composition. One is the sound of the stadium organ, which led him to score the music for a “Miles” jazz quintet. This particular grouping of instruments is as capable as any large orchestra of realizing music in all its potential variety. The musical materials boil down to the rising three-chord “Charge” fanfare still heard in stadiums everywhere. Sasha Matson graduated from the San Francisco Conservatory of Music and UCLA, where he received his Ph.D. He has scored music for feature film and other multi-media in addition to own his compositional work. He writes about audio and music and is an associate editor for Positive Feedback Online.

Stereophile: Record of the Month, April 2015 — read the complete review through this link: http://www.stereophile.com/content/recording-april-2015-matson-cooperstown 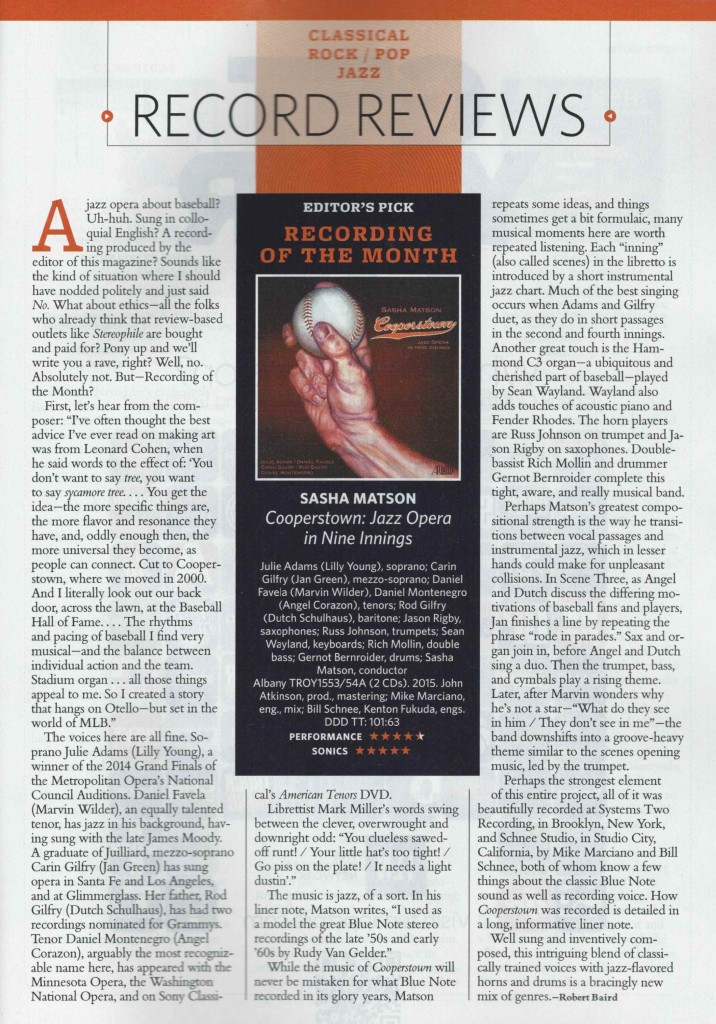 ‘Baseball more than any other major league sport is deeply woven into the fabric of American culture. It is a metaphor for life,’ says composer Sasha Matson, talking of his latest recording of his ‘jazz opera in nine innings,’ Cooperstown, just released on the Albany label. Matson, who is actually a resident of the upstate New York community which is home to baseball’s Hall of Fame, has enjoyed a long, productive career as a composer of songs, chamber music, symphonic works, and film scores. He took time to speak to Fanfare about this latest project and his diverse musical interests.  READ MORE …

Sasha Matson has, indeed successfully built a life nourished by music. His varied voices and imaginative experimentation, as well as his essential gifts for melody and harmony, both classical and jazz have contributed to a rich and varied output.

Sasha Matson’s jazz opera Cooperstown, to a libretto by the composer and Mark Miller, is an inventive and winning chamber opera scored for a jazz quintet and five soloists, in which baseball provides both the setting for the action and the metaphorical context for the various relationships and romances of the characters.  Cooperstown is a conventional operatic love story articulated in jazz instrumentation that underscores traditional lyrical vocal writing. It is dramatically predictable, but fascinatingly offbeat in musical terms, and as such it manages to hold the listener’s interest throughout.

Cooperstown offers a captivating listening experience, and there are enough delights in the recording to wish that some venue might wish to mount a live production! Highly recommended to jazz and opera lovers alike—not to mention baseball fans! Carla Maria Verdino-Süllwold READ MORE …

The libretto (by Matson and Mark Miller) is sharp as a pin and often striking: the Fifth Inning finds Marvin observing as he is serving Jan, who is drinking alone: “In a thicket of barstools, Blooms the thorniest rose.”  This is just one example among many of a striking use of English; the concerted result of libretto, score, and performance is a winning one. The piece is rewarding over multiple listenings, as more and more subtleties make themselves clear. A most fascinating release. Colin Clarke READ MORE …

If you listen to just one baseball-themed jazz opera, make sure it is this one. Yes, such works don’t come my way (or anyone’s, for that matter) often, but Sasha Matson’s “opera in nine innings” has quite a pedigree.  With a libretto by journalist and writer Mark Miller and a high caliber cast, including star baritone Rod Gilfry and his daughter Carin, this is a classy affair. Although premiered in 2007 at the National Baseball Hall of Fame Grandstand Theater, its unusual setting is perhaps what makes it a work better suited to the studio, where it was recorded in 2011–12.

The sound is excellent: full, forward, and detailed in keeping with the vivid Blue Note recordings the producer wanted to recall. Although the vocals were added a year later to the band tracks (a practice I generally hate), there seems little sense of detachment or artifice. Albany, as usual, produces exemplary documentation with full notes, bios, and printed libretto. My only criticism is that it helps to know and love your baseball, but Cooperstown remains an intriguing and successful oddity. Barnaby Rayfield READ MORE …